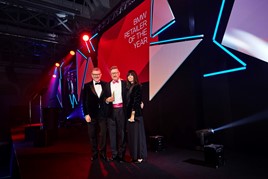 The sprawling 200,000 square-foot BMW and Mini retail facility, which was opened by the AM100’s top ranked retail group in December 2017, claimed the top accolade as a total of 15 awards were handed out at the event, which was held at Old Billingsgate Market, in the City of London.

As well as claiming the Retailer of the Year award, Sytner’s Sheffield site also won the award for aftersales performance as the group as a whole claimed the award for Marketing to make it a hat-trick of award wins on the night.

Congratulating all the winners from the BMW Retailer Awards 2020, Graeme Grieve, BMW Group UK’s chief executive, said: “2019 was a significant year for the BMW retail network, with 14 new models successfully launched despite softened conditions in the wider market.

“The success of the BMW brand in the UK is only possible thanks to the efforts from our highly motivated teams across the country who deliver exceptional customer experiences every day.

“I’m delighted to recognise their achievements and congratulate each of our deserving winners.”

The brand achieved its record sales year in 2016, when its registered a total of 182,593 vehicles.

BMW's flagship dealer dresses down for 2020

BMW's flagship dealer dresses down for 2020