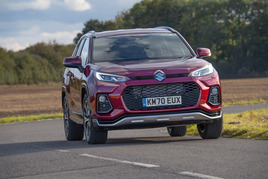 Stoner Motor Company is set to join the Suzuki GB franchise with the opening of a new dealership in Medway.

The Kent-based car retail group, which already represents Hyundai Motor UK and MG Motor UK at facilities in Tunbridge Wells and Medway, has secured a new site for the Japanese brand.

Group director, Dean Stoner, took to LinkedIn to announce the group’s appointment with Suzuki this week.

Stoner said he was “delighted” to announce the arrival of Suzuki to Medway, adding: “With a new location secured we are excited to work with this much-loved franchise.

“I would like to thank Suzuki and all my staff involved in helping us put this project together and a special thank you to my general manager Ian Barwick for his continued effort and enthusiasm to help me grow our family business.”

Barwick said there were “exciting times” ahead for the group.

Suzuki, which has a model range now entirely electrified in some part, has recently expanded its alternative fuel vehicle (AFV) range with the addition of its new Across plug-in hybrid SUV and Swace hybrid estate car as part of a partnership with Toyota.

The brand attracted praise from its retailers after reacting swiftly to support them when COVID hit the sector 12 months ago.

In an interview with AM, Dale Wyatt, director of automobile at Suzuki GB, later described his response as “a bit Heath Robinson”.

In November, it followed that up with a bonus of up to £10,000 to its franchised car dealers as a reward for their efforts to adapt to trading during the COVID-19 pandemic.

Speaking to AM following the launch of the initiative, Wyatt said: “Our retailers have worked extremely hard to evolve to the situation and we want to protect them from the impact of more lockdown restrictions as well as we can."