Peter Vardy Group branding will appear on the sleeves of Edinburgh Rugby’s team shirts after the car retailer secured a four-year sponsorship deal ahead of this season’s major tournaments.

The Edinburgh-based group will provide the professional rugby team with BMW pool cars as part of the deal which will guarantee marketing exposure in the sport’s newly-formed United Rugby Championship and European Cup.

News of the deal also comes as the club prepares for the long-awaited opening of its new 7,800 capacity stadium – Edinburgh Rugby’s first-ever permanent home.

“It is an extremely exciting time for the club – with the completion of our new purpose-built home and the launch of the United Rugby Championship – so to have Peter Vardy Group join us on this journey is a great vote of confidence that we are moving in a bold and positive direction.

“Having already joined Scottish Rugby’s Sponsor Family earlier this year, it has been brilliant to see, first-hand, the group’s enthusiasm for rugby in Scotland.”

Back in April AM100 car retail group Peter Vardy became the principal sponsor for the Scotland national team in a four-year deal commencing in the summer of 2021.

Commenting on its new ties with the rugby community, group chief executive, Peter Vardy, said: “Following our support of Scottish Rugby earlier this year, it seemed a natural development for us to back the game at a local level.

“We have been hugely impressed by the commitment of Edinburgh Rugby to nourishing community involvement and the active participation of young people throughout Edinburgh and the Lothians.

“We recognise that this is a landmark year for the club, and we are delighted to play our part in helping make it as successful as possible.” 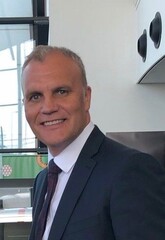