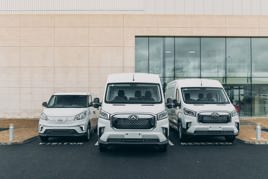 Stoner Motor Company has joined the growing Maxus commercial vehicle retail franchise with the addition of a new dealership in Rainham.

The Hyundai, MG and Suzuki dealer will trade as Medway Maxus from the new business, which offers a full-service Maxus dealership at London Road.

The addition of Medway Maxus brings the total number of Maxus dealerships in the UK to 49.

Mark Barrett, general manager at Harris Maxus, said: “We are excited to announce further expansion for Maxus in the UK and look forward to a great partnership with Stoner Motor Company which has been operating for ten years and is well-respected, representing brands such as Suzuki, MG and Hyundai.

“Medway Maxus will offer our full suite of vehicles including our award-winning electric range. We look forward to bringing Maxus to the area and we know our brand is in good hands.”

The new dealership will feature the full range of Maxus vehicles, including the diesel-fuelled Deliver 9, the eDeliver 9 and eDeliver 3.

Dean Stoner, director at Stoner Motor Company, said: “This is a key partnership for us, and we’re thrilled to be doing business with Maxus.

“Not only is the brand ahead of the curve when it comes to innovation, the choice of vehicles on offer is brilliant when you consider all the elements – high-spec design, the latest technology, great range and competitive pricing.”

Drayton Motors, which has this week taken on the Scunthorpe Kia franchise from Marshall Motor Group, is also among the brand's new dealer additons with its facility in Boston, Lincolnshire.

In 2020, Maxus added Rivervale Cars to its expanding UK franchised dealership network as part of the company’s expansion plans.