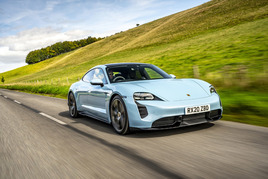 Porsche GB’s growing franchised car retail network has contributed to year-to-date growth amid a market down 35.5% due to the ongoing COVID-19 ‘Lockdown 3’ showroom closures.

Its result comes despite a tough February in which just 193 Porsche's were registered in the UK - down 30.6% year-on-year.

Deliveries of its new-in-2020 Taycan, the Volkswagen Group brand’s first pure electric vehicle (EV), may have been responsible for the brand's early uplift after it ended 2020 as its second-best selling vehicle, behind the Macan SUV.

Porsche enjoyed its second-best annual registrations result ever in the UK last year, delivering a total of 14,284 vehicles (2019: 15,257) as it welcomed the two new franchised sites to its retail network, despite challenging trading conditions.

Listers Group opened its Hull Porsche dealership in January and Pendragon opened its Stockport site in August while also gaining planning permission for a new 'gateway' dealership in Nottingham.

January this year brought the opening of a new franchised dealership in Norwich and it the network also preparing to add an upgraded South Lakes centre to its network this summer while Porsche Retail Group has begun to upgrade its Reading Retail site into a flagship ‘Destination Porsche Centre’, possibly the first of its kind in the UK.

JCT600, meanwhile, has begun development work on a new kind of a more compact, 'satellite' Porsche showroom in York, meanwhile.

And while Hawes recognised car retailers’ shift to online sales and COVID-safe click and collect handover processes, the SMMT's registrations data laid bare the extent of certain manufacturers suffering in a challenging February.

The Kia Motor UK franchise was a stand-out registrations performer during February, declining by just 5.93% to ensure that it has been able to deliver 9,144 new vehicle registrations year-to-date, despite the ongoing showroom closures, to end the month just 2.08% down YTD.