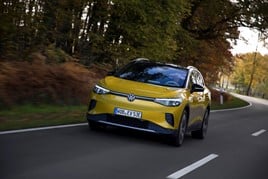 Stellantis swelled its share of Europe’s new car market as Peugeot Citroen, Fiat and Vauxhall models made up six of the region’s top ten best-selling models as its brands returned to a pre-pandemic market share of 21.9% last month.

But Volkswagen continued its reign as Europe’s biggest selling manufacturer with 26.8% of the market after its new ID.4 SUV surged to the top of the electric vehicle (EV) sales charts. 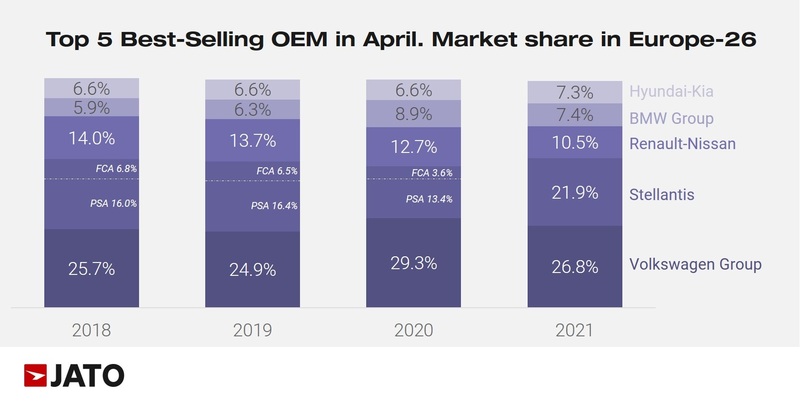 VW and Stellantis continued to battle it out at the top as Jato Dynamics reported a 261% surge in new car registrations across Europe during April (to 1,029,008) to leave the market 23% up year-to-date.

Europe’s new car registrations remained 25% down on the pre-COVID trading of April 2019, however.

Felipe Munoz, global analyst at JATO, said: “These results indicate that recovery is going to be slower than many may have expected, and in the short term, this will not offer much encouragement to OEMs already busy dealing with the challenges of adapting to emissions compliance.”

Car retailers have told AM that OEMs remain largely in the dark about the extent of the crisis’ impact, with some suggesting a return to normal production this summer, while others suggest shortages could impact the sector for two years.

Munoz suggested the expense of EVs was also having an impact on the sector, as nations across Europe continued to implement legislation and incentives to drive sales of zero-emissions vehicles.

He said: “While lockdown restrictions and the impact of the pandemic may seem like the root of the problem, the shift towards EVs is also having a knock-on effect. As these vehicles are more expensive, we are seeing fewer units traded in comparison with traditional ICE models.”

Alternative fuel vehicles (AFV) did deliver record registrations results in April, accounting for 15% of the market, compared to just 11% posted a year ago.

The start of VW’s EV product push is already paying dividends, its ID.4 topping the EV rankings ahead of the ID.3 in second place.

Jato noted that this was the first time an SUV had topped the EV rankings and Munoz suggested this was indicative of the start of the next phase of AFV adoption.

He said: “As anticipated, the next phase of growth for EVs is going to come from SUVs.

“The Volkswagen ID.4 taking the lead is just the beginning of the electric-SUV trend, and we expect new models to enter the market as consumer demand increases.”

The Volkswagen Group gained 34% of the European EV market in April, offsetting the losses posted by Volkswagen’s traditional ICE models.

Jato’s data showed that the Volkswagen Golf was the third best-selling model in the overall rankings as its volume decreased by 49% between April 2019 and April 2021.

Peugeot was able to position both the 208 and 2008 as the first and second best-selling cars in Europe, meanwhile.

They were joined in the European top ten best sellers list by the Vauxhall Corsa, Fiat 500, Peugeot 3008 and Citroen C3.