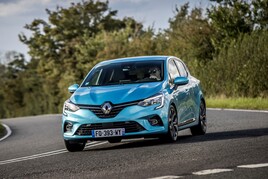 Year-to-date, Europe’s growth in registrations is now just 0.4% compared to 2020.

Felipe Munoz, global analyst at Jato Dynamics, said: “Although the market has not recovered entirely from the pandemic, the current problem does not relate to a lack of demand, but rather a lack of supply.

“When you consider the chip shortage in combination with local lockdowns experienced over the course of this year, there is a clear backlog of consumers wishing to renew their cars.

“This delay could have two main impacts: the first being that we see a large uptick in registrations next year if the shortage is solved; the second that consumers begin to adapt their buying patterns, moving toward keeping their vehicles for longer periods.”

Jato said that vehicle production issues had a “notable impact” on the overall best-selling vehicle rankings in November.

The top position was occupied by the Renault Clio, however there was less than 200 units between the Renault and the fourth model in the ranking.

Registrations of the Volkswagen Golf and Toyota Yaris fell by 72% and 65%, respectively.

Discussing expectations for the 2022 used car market in the UK this month, Cap HPI head of valuations, Derren Martin, and Cox Automotive insight and strategy director, Phillip Nothard, both told AM that a significant uptick in new car production was a long way off.

Martin that his “biggest concern” for used car values was towards the end of next year, when supplies may come back on-line more widely, however, and he urged the sector to employ “cautious remarketing” to avoid a used car price drop if volumes do escalate quickly.

Car manufacturers are clearly prioritising the production of electric vehicles (EV) as they battle with issues surrounding the supply of semiconductors and other components.

The market share reflected that reported in Society of Motor Manufacturers and Traders (SMMT) data for the UK market.

The volume for low emission vehicles was 41% higher than achieved for diesel, it said.

Despite last week’s further reduction of the plug-in car grant (PiCG) buying incentive for motorists in the UK, Munoz said that offers were increasing the appeal of EVs across Europe.

He said: “If you want a new car in this current environment, the chances are that EVs are going to be more accessible given the range of offers and incentives available.”

In the PHEV market, the most-registered car was the Peugeot 3008, followed by the Volvo XC40 and Ford Kuga.

Elsewhere in the sector, notable registrations performance came from the new Hyundai Tucson, which made it into the top 10, as Tesla more than doubled its registrations of the Model 3 and the new Toyota Yaris Cross came in at 24th position as it outsold the standard Yaris hatchback.