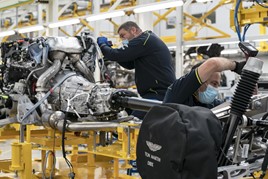 The UK car manufacturing sector was described as “deeply troubled” as soaring energy costs and competition from the EU tempered optimism following the first uplift in productivity for 11 months.

Production rose by 13.3% year-on-year in May, ending a run of monthly decline which started in July last year, as 62,284 vehicles left factories across the UK. 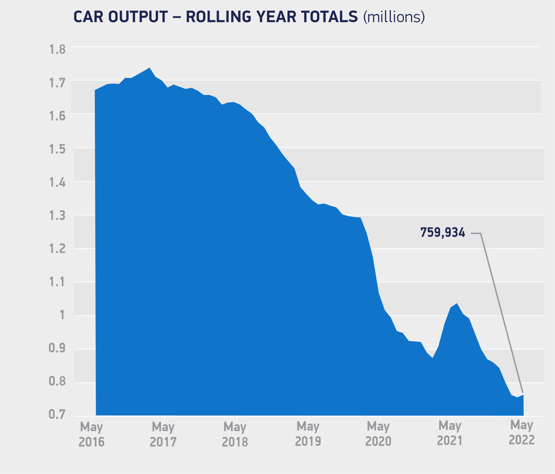 Research for its From Full Throttle to Full Charge report revealed manufacturers are facing a £90 million increase on their energy bills, which are already 59% higher than the EU average.

“With the industry racing to decarbonise, we need to safeguard manufacturing competitiveness, drive investment and develop the skill base.

“Government and industry have a role to play in this transformation and collaboration will be essential if the UK is to remain at the forefront of automotive innovation.”

What Car? editorial director Jim Holder said that rising energy costs were being compounded by an ongoing semiconductor shortage that was causing “both short run and long run concerns for manufacturers”.

He added: “A potential trade war with the European Union is another issue for automotive manufacturers in the country, many of which are currently either in the process of either refitting factories in the UK to suit electric vehicle assembly, or looking to build new ones. Uncertainty over trade deals is the last thing they need.

“For a sector that employs 797,000 people across the UK, and which added £11.9 billion in value to the UK economy last year alone, greater Government support and consideration is needed to ensure stability and growth in the coming months and years.”

The SMMT said that production for both overseas and domestic markets increased in May, by 8.9% and 39.5% respectively.

Exports accounted for 82.1% of all new cars built, with almost six-in-ten of these destined for the EU.

UK carmakers continued to build the latest and greenest zero and low emission models at pace last month, with electric vehicle (EVs) volumes up 108.3%, while more than one-in-five (22.6%) of all cars built last month was alternatively fuelled – a rise from 19.3% in May 2021.

Holder described the uplift in alternative fuel vehicle (AFV) production as “about the only positives”, however.

Richard Peberdy, UK head of automotive at KPMG, said: “The UK automotive sector’s recovery from the disruption of the last two years remains deeply troubled. High energy costs are clearly part of that picture and will further challenge the resilience of UK car makers.

“Amidst a cost-of-living squeeze and very limited new vehicle supply, passing increased costs back to the consumer is far from easy.

“Whilst at a time of great innovation for the industry, having to cut R&D budgets or investment risks future growth and market position.”