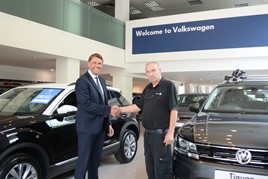 Paul Tanner, the managing director of Alan Day, said that the South London technician “inspires people around him” as he recognised the contribution of Jackson, who clearly places importance on customer liaison and the transparency of the business’s service department.

But Jackson, who started work with the motor group in 1981, said that he used to ask customers back to the service bay to view a problem but now everything has changed.

He said: “I’ve got a lot of customers who I have known for over 20 years and they ask for me. They come back regularly and I like to treat them respectfully and sort their problems out – I like to think that they know I care.

“In the old days, I’d ask the customer if he lived locally and if he could he pop down to the workshop and I’d actually show him the problem with the vehicle.

“Using modern-day technology now, it’s all down to iPads and we send the customer a video of their vehicle, so if you are saying a tyre has got a cut in it, they can actually see it in the video. It’s a trust building thing.”

Jackson, who specialises in repairs to Volkswagen and Audi cars was once awarded technician of the year throughout the whole UK.

Jackson has worked at Alan Day branches in New Southgate, Hampstead and the City and believes that providing a good servicing and repair programme after a customer’s car purchase is the way to improve customer loyalty and generate repeat sales.

He added: “A customer comes in and buys a car, it’s a pleasant purchase for them but I think the service department sells the second car because at the end of the day if the customer doesn’t get good service after he has bought a vehicle, he’s not going to go back to the same dealership.”

He added: “I think the motor trade is actually a good trade to get into. I mean, when I first started out, it was one of those jobs where people did not think you needed to be pretty clever, but nowadays the people who work in the motor trade are very clever and it’s got more potential and future than it did years ago.

“Everyone thought they could be a mechanic, but nowadays it is not the same, you need highly trained people who are motivated to learn and move forward.”

Tanner said that it was a pleasure to recognize a “fantastic individual” in Jackson, adding that “his passion for the job inspires people around him, especially our younger apprentices who are just starting in the industry and aspire to be like him”.