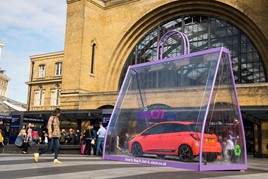 A Toyota Yaris was put on display in a giant shopping bag outside London's Kings Cross train station as the consumer marketing for BCA's cinch online retail platform gathered pace.

The activity comes as competition in the online car retail space continues to heat up.

Yesterday (September 19) carwow followed-up its recent £25m funding round, led by Mercedes-Benz owner Daimler, with the launch of a crowdfunding scheme which encouraged car retailers to “join their journey”.

To date, the business has raised £55 million from leading venture capital investors including Accel, Balderton, Episode 1 and Vitruvian and it said that its new funding streams would help to “deepen its presence in Europe by investing in talent, product development and marketing”.

Cinch does not only face fresh competition from carwow, however.

Earlier this month Cazoo followed up its recent UK recruitment drive with a further £25m raised in a new funding round, taking its total fund-raising effort to £55m before its launch later this year.

Furthermore, last month saw the Daimler and Volkswagen-backed online used car retail marketplace Heycar launched in the UK, with a dealers stock of over 100,000 vehicles available for consumers to browse.

Offering vehicles of up to seven years in age and 70,000 miles from what BCA describes as a “trusted dealer network” of franchised retailers and independents, the platform asks visitors a number of questions about their lifestyle before helping to recommend a numbers of cars which fit their needs.

Jonny Crowe, BCA’s divisional chief executive for cinch, said: “Every element of cinch has been built in direct response to what the dealers and consumers have told us they want from the car finding, buying and selling process.

“Many consumers currently arrive at dealerships without really knowing what they want and dealers get overloaded with undifferentiated enquiries.

“Cinch cuts through this inefficiency, empowering dealers with better qualified leads that have a higher likelihood of conversion and helping consumers make the right decision.”

The findings of research conducted by cinch suggested that that one-in-10 (9.2%) UK consumers have regretted buying a car in the past, with 18% admitting they discovered a more suitable model after purchase.

Over a third (38%) of those surveyed believe that a personalised online shopping experience helps them make a decision, it said, adding that three quarters (76%) of shoppers admitted that they feel valued by a retailer that tailors the sales experience to their needs.