Motors.co.uk has secured a deal to be the headline sponsor of new ITV quiz show Ant and Dec’s Limitless Win.

“We’re delighted to be the headline sponsor of Ant and Dec’s Limitless Win to once again present the Motors.co.uk brand to millions of primetime television viewers on what is set to be a truly ground-breaking family show,” said eBay Motors Group’s head of marketing and research, Dermot Kelleher.

“We believe the combination of Ant and Dec’s Limitless Win’s audience reach and premium positioning on peak Saturday evenings will combine to accelerate consumer awareness and consideration of Motors.co.uk as a place for car buyers to find the car that’s right for them.”

Kelleher added: “As the proud sponsors of Paul O’Grady’s Saturday Night Line-Up, Motors.co.uk has already seen encouraging uplifts in brand health metrics, with the show contributing to a significant increase in brand preference, with buyers saying that Motors.co.uk is a destination they consider for ‘easy’ and ‘quick’ car search.

“Our investment in television advertising underlines our long-term commitment to our dealer partners by putting their stock in front of even more potential used car buyers.”

In the summer AM learned the used car advertising platforms Gumtree and Motors.co.uk would be offered for sale after Norwegian online advertising business Adevinta completed the acquisition of eBay Classifieds Group.

Motors.co.uk, Gumtree and eBay were brought together under one brand, the eBay Motors Group, in November 2019, and at the time the new entity said that it would enable motor retailers to access their broad range of vehicle advertising services from a single point.

New owner Adevinta agreed to sell the Motors.co.uk and Gumtree – along with its Shpock classifieds site – after the Competition and Markets Authority (CMA) expressed concerns that a deal between it and the Silicon Valley-based eBay would see Facebook emerge as its only true competitor, however. 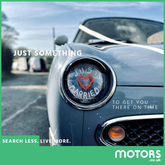