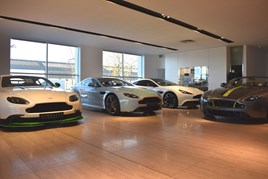 Leven Car Company has realised a three-fold sales increase in the sale of used Aston Martins following implementation of video technology in what is being claimed as a victory for service provider CitNOW.

The installation of CitNOW’s app-based sales and workshop technology in 2015 is thought to have broadened the retailer’s reach, as luxury car buyers further across the UK and overseas have been engaged through video during their search for a used vehicle.

The Leven Car Company’s used car sales success is a sign for optimism in a challenging market, as unsold used vehicle stock reached a record value of £27.3 billion at the start of October.

Leven has reported a three-fold increase in video use since the first year of implementation and, typically, customers have rated the retailer’s videos five-out-of-five stars on average using CitNOW’s rate this video feature.

“The ability to communicate the intricate details that make our used cars truly exciting has been invaluable, and made a tangible impact on the business.”

CitNOW’s chief executive, Alistair Horsburgh, said: “The impact of personalised video for the Leven Car Company has been exceptional.

"Using video has not only enabled the team to sell a greater volume of vehicles, but also the high-value accessories that add the finishing touch.

“Retailers now have an opportunity to follow suit and build consumer confidence by adopting a technology-led, personalised approach.”