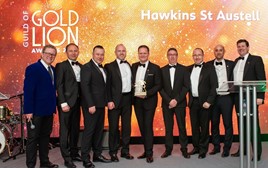 The top 25 performers from the PSA Group brand’s 183-strong UK franchised dealer network were recognised at an awards ceremony at The Grove Hotel, in Hertfordshire, last weekend, alongside its  top 25 sales managers, aftersales managers and top 10 best performing Business Centres.

Hosted by impressionist and comedian John Culshaw, the awards saw retailers from the South West emerge at the top of the rankings with many of the top performing sites and staff found in Barnstaple, Exeter, St Austell, and Launceston.

David Peel, the managing director of Peugeot UK, said: “Last year was another tough year for the UK new car market, but Peugeot continued to buck the declining trend.

“This success is down to the excellent staff we employ throughout the Network, and our Guild of Gold Lion programme has been established to recognise the wide berth of talent working at Peugeot.

“This year’s winners all exceeded our expectations and continued to set a positive example to their colleagues.”

Peugeot’s parent company, the PSA Group, was named Manufacturer of the Year at last month’s AM Awards 2020.