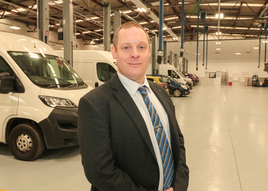 Among the state-of-the-art facilities is an entrance featuring automated doors which open up onto floor sensors that will assess their tyre tread, inflation and quality.

Development of the new aftersales facility is part of Bristol Street Motors’ ongoing investment in Harlow.

Its Peugeot dealership, also on River Way, is currently being refitted to become a multi-franchise location, offering Vauxhall, Citroen, and Peugeot sales.

The work there is expected to be completed in the first half of 2022.

Andrew Laudrum, the aftersales general manager of Bristol Street Motors Harlow Peugeot, said: “This new service centre is at the very leading edge of the industry. I’m really excited by some of the diagnostic equipment going in, especially the in-floor sensors.

“The site offers customers an excellent location for any aftersales and servicing needs.”

Ollie Bell, franchise director at Bristol Street Motors, said: “The new service centre is the first part of our investment in Harlow, which will see us also expanding and improving our existing dealership.

“I am very pleased that we have been able to create more than 20 jobs at this site alone and look forward to welcoming more colleagues next year.”

Stellantis has confirmed that it will make Ellesmere Port a dedicated manufacturing facility for the production of Vauxhall, Opel, Peugeot and Citroen's all-electric vans.

Earlier this year Stellantis confirmed that retail franchisees of its Alfa Romeo and DS car brands and all light commercial vehicle (LCV) operations will be subject to agency model sales contracts from 2023 after it announced that its car retail franchisees would be issued with two-year termination notices as part of a reorganisation of its distribution networks.

The OEM has confirmed that it will make Ellesmere Port a dedicated manufacturing facility for the production of Vauxhall, Opel, Peugeot and Citroen's all-electric vans.

This summer it announced that it will spend £25bn in the next five years to establish a new generation of electrified vehicles and batteries, with Vauxhall becoming EV-only by 2028.