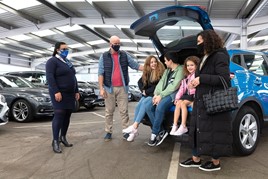 Motorpoint will go live with a new television advertising campaign on Boxing Day, side-stepping the use of a ‘Your Car, Your Way’ slogan which created tensions with Pendragon.

The used car supermarket group’s new ‘Car Buying Made Easy’ TV advert focuses on the choice, value, service and quality offered to customers of the business and will be screened on BT Sport, Channel 4, ITV and Sky from December 26.

The campaign, which also features several members of staff from across the Motorpoint network, will also run via digital, OOH, radio and social media channels.

Motorpoint marketing director, Hayden Vokes, said: “We are genuinely excited to be returning to the small screen with our new campaign creative, especially with it featuring a number of the Motorpoint team, and are extremely confident that our new ‘Car Buying Made Easy’ message will really resonate with viewers over the festive period and beyond.” 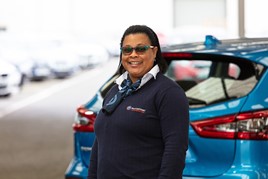 Venessa Chin, customer service manager at Motorpoint Peterborough, and one of those featured in the TV advert, said: “Christmas definitely came early for me being chosen to appear in the new Motorpoint TV advert.

“We work so hard as a company to bring our customers the best value cars and it’s been amazing to help play my part in getting this message across to the whole nation.”

In June Pendragon had launched a new omnichannel advertising push for its Stratstone, Evans Halshaw and Car Store divisions, which is based around a COVID-themed “Buy your car, your way”.

Motorpoint, which has just opened its latest store in Stockton-on-Tees following a multi-million-pound investment in the site on Teesside, has partnered with 2020 Media to create its new 30-second and 10-second TV commercials.

The marketing push will see Motorpoint go head-to-head with other used car retailers keen to highlight the home delivery of their sales proposition, with Cazoo and cinch both running high-profil campaigns.

Speaking to AM about the need for a strong marketing message, Jason Cranswick, who joined cinch as retail director back in August, told AM: “How you drive customers to that online inventory is critically important. The cost of doing that is equally challenging as building a consumer platform in the first place.”

He added: “I’ve been really pleased with the cinch adverts with Rylan (TV host Rylan Clark-Neal). They’ve resonated with people really well and that benefits all our dealer partners that have come on board.”