September’s new car sales will be a ‘true barometer’ of the UK’s automotive recovery after a 1.2% rise in August registrations left the sector down 10.7% down year-to-date.

Data from the Society of Motor Manufacturers and Traders (SMMT) showed that 68,858 new vehicles hit UK roads last month in what remained the second lowest August registrations volume since 2013.

But August's result was only the second rise in volume this year and left total registrations from the first eight months of this year trailling the same period of pre-pandemic 2019 by 35.3%

“Spiralling energy costs and inflation on top of sustained supply chain challenges are piling even more pressure on the automotive industry’s post-pandemic recovery, and we urgently need the new Prime Minister to tackle these challenges and restore confidence and sustainable growth.

“With September traditionally a bumper time for new car uptake, the next month will be the true barometer of industry recovery as it accelerates the transition to zero emission mobility despite the myriad challenges.” 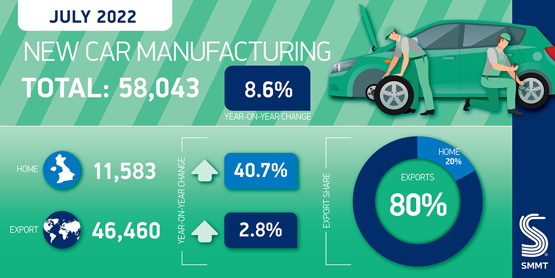 The SMMT’s data showed that large fleet registrations fell by 1.6% in August as deliveries to private consumers rose 3.2%. and business customers saw the largest increase, of 26.6%.

Electric vehicles (EVs) recorded a 35.4% increase in volumes, resulting in a 14.5% market share. 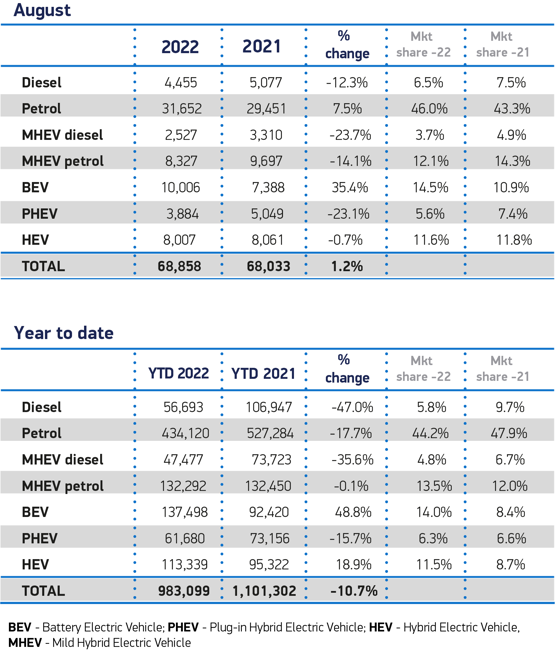 The SMMT noted, however, that the growth in EV registrations is slowing, with a year-to-date increase of 48.8% well down on Q1’s growth figure of 101.9%.

What Car? editorial director Jim Holder said that August’s SMMT new car registrations data showed that the UK automotive sector continued to “sit at the edge of a precipice”.

“It faces the short-term crisis of a potential recession eroding new car demand and undermining the buoyant used car market, plus the potentially longer-term impacts of rising energy and raw material costs, all at a time when it needs to be investing unprecedented amounts in new electric car technology,” he said.

“Previous estimates by the Society of Motor Manufacturers and Traders found the rise in energy prices will add another £90 million in costs for OEMs operating in the UK this year alone.

“A rise in costs of manufacturing is eventually passed to consumers through higher prices or offset with lower investment – neither which is ideal for the sector or the economy.

“While the industry has risen admirably to the recent challenges its faced, continuing doing so while facing huge financial pressures puts it under an unprecedented strain that threatens its ongoing success as a cornerstone of the UK economy.”

Plummer said: “The new Prime Minister needs to think imaginatively about ways to encourage EV adoption ahead of the 2030 ban on new diesel and petrol sales. That should include measures like bolstering the UK’s charging infrastructure, which is far too focused on the South-East.

“Cutting the 20% VAT rate on public charging points would be welcome, as would extending the Workplace Charging Scheme for those unable to charge up at home. Even non-financial benefits like allowing EVs to drive in bus lanes could encourage switchers. We cannot lose sight of the bigger prize.”