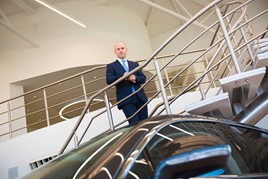 Sytner Group has reported a 7% increase in turnover and 14.2% rise in pre-tax profitability as it delivered a record set of annual financial results in the year to December 31, 2018.

The AM100’s number one retailer by turnover and AM Awards 2018’s Retailer of the Year showed no signs of slowing its growth in the challenging UK car market as its revenues reached £5.95 billion and profit before tax rose to £113.3 million.

Adding The Car People to the group’s portfolio in January last year, a year after its acquisition of the £275m turnover CarShop business, left Sytner with a used car supermarket division with annual revenues of around £500m.

A statement signed off by the board said: "The trading performance of the group for the 2018 calendar year was strong.

"The group's focus for the future is to organically grow the business, along with its franchise partners, and to progress acquisitions where opportunities arise.

"The group has also recently diversified into the used car supermarket sector and further capital investment and expansion is planned in this area in the coming few years."

As well as expanding its used car operations in 2018 – a process which has continued with the opening of a new CarShop facility in Nottingham this summer and the re-branding of The Car People sites – Sytner withdrew from the Lexus franchise with the disposal of its Leicester dealership in February of last year.

Sytner Group’s strong 2018 performance, following its expansion into the used car supermarket sector, marks a welcome return to profit growth after it recorded a 9.3% decline in pre-tax profit despite generating a record turnover during 2017.

Leicester-headquartered Sytner sells more than 7,500 cars per year from its network of 140 dealerships across the country.

In an interview with AM during 2018 Sytner chief executive, Darren Edwards, said that the company’s aim remains to “be the best”, regardless of whether that makes them the UK’s biggest car retail operation.

He said: “As a company, we never set out to be the biggest, we just wanted to be the best.

“The best brands, in the best locations, with the best premises, and employing the best people. It just so happens that this formula has meant we have become the biggest. Whether we stay the biggest or not, doesn’t really matter to us. What matters is that we stay the best.”