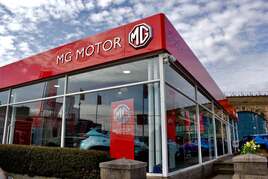 The new dealership is situated on Northgate and offers an indoor showroom including sales, aftersales and used car facilities and EV charging facilities.

Perrys manging director, Darren Ardron, informed AM of the impending opening of the new MG Huddersfield business in an interview back in December.

MG’s expansion in 2021 follows the addition of 28 new retail sites in 2020 and the addition of the new MG 5 SW EV and MG HS SUV to its product line-up as its targets continued sales growth.

Earlier this month, Minstergate Group jumped into the MG Motor UK franchise with the opening of new dealership sites in York, Hessle and Scarborough.

Guy Pigounakis, MG Motor’s commercial director, said: “As the UK’s fastest-developing car brand, the appointment of Perrys in Huddersfield is a key strategic development to further awareness and sales of MG in West Yorkshire, via a trusted independent dealer group that is already well-established in the region.

"It’s further proof that MG is a highly desirable franchise thanks to great value cars that are great to drive, packed with technology and backed by a 7-year warranty.”

MG Motor plans to increase its network to 130 dealers by the end of 2021, with an additional new Perrys MG site in Preston also joining its roster of dealers this year.

AM Magazine reviewed the launch of the pivotal new MG5 and HS PHEV models last year.