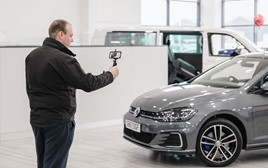 Car retailers delivered one million CitNow customer videos in March alone as the supplier celebrated a 'landmark' moment in the automotive retail sector's adoption of the technology.

The increase in the use of video in dealership showrooms and workshops cements the technology’s “growing importance in fostering transparency and customer service”, according to CitNow.

CitNow’s chief executive, Alistair Horsburgh, said: “These numbers are staggering and it just goes to show how the motoring industry in the UK has really embraced and adopted video, as well as the benefits it offers in a world where car buyers and workshop customers are time-poor but expect ever-increasing levels of service and transparency.”

The number of videos made by CitNOW increased by 28% in 2018, compared with 2017, and the company said that it was not surprised by March's record performance, as March typically serves as the busiest month of the year for car retailers.

Demonstrating how global markets are now swiftly following the UK’s lead, the number of videos made for non-UK customers saw even more growth, with a surge of 51% on 2017 figures.