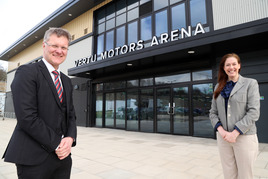 Vertu Motors has acquired the naming rights to the Eagles Community Arena in Newcastle in a five-year deal.

The Gateshead-based AM100 car retail PLC’s branding will feature prominently at the 3,000-seat home to the Newcastle Eagles basketball club and the award-winning Eagles Community Foundation, which will now be known as the Vertu Motors Arena.

Vertu said that the move would ensure its branding was seen by hundreds of thousands of people visiting the city and watching British Basketball League games live on Sky Sports.

Speaking to AM last week, Vertu chief executive Robert Forrester, said that the group had not increased its marketing investment to increase its presence on TV during the COVID-19 pandemic, as sector players signed a series of sports sponsorship and advertising deals.

Vertu secured a sponsorship deal to become the lead marketing partner of Channel 4’s Formula One coverage back in March last year.

But Forrester said: “We’ve spent no more. It’s been more about a reappropriation of funds.”

Yesterday (March 11), AM reported that car buyers turning to televised sports during COVID-19 ‘Lockdown 3’ looked set to continue to be a prime target for retailers, with Cazoo, heycar and Vanarama all securing new football-related marketing opportunities.

Cazoo this week followed-up its existing sponsorship of Premier League Aston Villa and Everton with a “multi-year” dealer to become the Official Partner of the EFL – giving it exposure with all 72 clubs across the sport’s full spectrum of competitions.

Speaking to AM earlier this week, Marshall Motor Holdings chief executive Daksh Gupta said that his AM100 PLC had increased its marketing budget in a pivot towards sport over the past 12 months.

Gupta said: “We started planning this marketing activity 18 months ago, but it has clearly paid dividends in lockdown. Together it’s seen 100 million live viewers exposed to our brand on TV.”

Commenting on its new naming rights deal with the Eagles Community Arena in Newcastle, which has most recently been used as a COVID-19 vaccination centre, Forrester said: “We are delighted to have our name above the door on this important events, sporting and community venue.

“The Vertu Motors Arena is a standout landmark in the city, which is visited not only by sports fans but businesses and local people and to have our name associated with it is an excellent opportunity for the business.

“The Arena is a hub for the local area, and we are proud to have the chance to support the valuable work the Foundation does and the many community initiatives that make the Arena a genuine community asset.

“Newcastle Eagles are an iconic sports team in the North East and one we are already working in partnership with and to extend that collaboration is extremely exciting.”