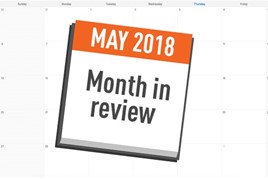 The most read story on AM-online in May was Vauxhall-related for the third month in a row, and detailed the rescue from administration of Now Vauxhall's sites by PSA's own dealer group and Eden Motor Group.

Also in the digital sphere, Volvo Car UK teamed up with Amazon to offer consumers ‘Prime Now' test drives, where the online retailer would arrange the delivery of a Volvo V40 hatchback to their door.

AM published the ID50 – the UK’s top 50 independent used car dealers by turnover – in May, which surpassed the £4billion mark for the first time. Motorpoint continued to lead the table, with CarGiant in second place. The full ID50 table is available here.

Also illustrating the success that independents were having in the 'year of the used car', Big Motoring World, number four in the ID50, opened a used car supermarket specialising in used Audis and Volkswagens and stocking more than 2,000 cars, at Bluebell Hill near Chatham in Kent. And Imperial Car Supermarkets (number seven in the ID50), which had grown from six to 11 sites in three years, said it would reach 20 used car retail sites by the end of 2019.