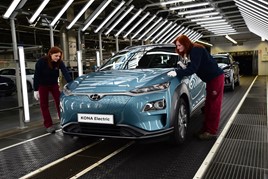 Hyundai Motor UK has claimed that it will significantly ramp-up the availability of its Kona Electric EV in order to cut delivery times.

Last May AM exclusively reported on Hyundai Motor UK’s offer of a short-term lease giving access to an Ioniq hybrid hatchback in a bid to mitigate the effects on long lead times for its popular Kona EV, following an interview with managing director Ashley Andrew.

Andrew conceded that high demand for the electrified Kona had led to an estimated lead time "in excess of 12 months", which had created issues surrounding customers’ wait for a vehicle.

The start of production of the Kona Electric at Hyundai’s European plant in the Czech Republic and an increase in the existing supply from its manufacturing facility in Ulsan, South Korea, could be about to help address the situation, however.

In a statement issued this week Andrew said: “The Hyundai Kona Electric has achieved outstanding success in the UK since its introduction, with demand for the model quickly outstripping supply.

“We have listened to our customers and are significantly ramping-up availability in order to cut delivery times, a move that we hope will encourage more people to consider a fully electric car.”

The Kona Electric boasts an official range of 278 miles and tops What Car? magazine’s ‘Real Range’ test for electric vehicles, achieving the longest driving range of any electric car tested.

Car retailers continue to battle with the balance between customer demand and the supply of new EVs amid a growing political and legislative push to embrace alternative fuel vehicle (AFV) technology.

AM reported today (January 30) how the new Volkswagen e-up! EV – an improved £19,995 entry level to VW’s electrified range – will only be available in “limited numbers”.

Volkswagen will be aiming to make a concerted impact on the EV market when its ID.3 hatchback arrives later this year.