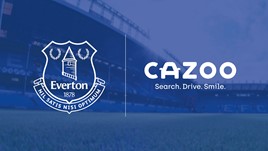 Cazoo has kicked-off its plan to cut its marketing costs as part of its bid to save £200 million per year with the loss of its high-profile Premier League shirt sponsorship deal with Everton FC.

The Merseyside club confirmed the departure of the New York Stock Exchange-listed online car retail platform as it confirmed that it had agreed a new multi-year partnership with the casino and sports betting platform Stake.

AM understand that Cazoo was unable to renegotiate an agreement which started in June 2020 as Everton moved to secure what it described as “the highest value front-of-shirt deal in the club’s 144-year history”.

A statement issued by Everton FC said: “The new club-record agreement comes following an expansion of Everton’s commercial team and a clear focus on delivering an uplift in revenue across all of the Club’s commercial assets.

“By taking up the option to end Everton’s previous main partnership with Cazoo early, the club’s commercial team were able to beat off competition from within football and other sports to secure the lucrative deal with Stake.com.”

AM understand that Cazoo’s sponsorship of Premier League Aston Villa will continue.

Such agreements are likely to come under close scrutiny after Cazoo announced plans to axe 15% of its workforce, cease accepting new business for its car subscriptions division and cut its capital expenditure in a bid to become self-funding in the UK.

The new strategy follows tumbling share prices for online-only car retail business across the globe, an issue explored in a recent News Insight feature which asked the question 'Have traditional car retailers disrupted online operators like Cazoo and Carzam?'.

In May Cazoo also revealed its profit per unit and gross profit had both declined although its revenues continued to increase as it grew he volume of vehicle sales at its operations in the UK, France and Germany.

Days later, in a report submitted to the Securities and Exchange Commission (SEC), an independent agency of the US federal government, it said that it cannot guarantee it will “achieve profit at all”.