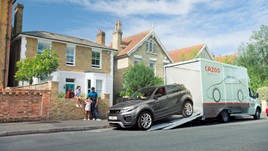 Cazoo will launch a series of new TV and radio adverts this weekend as part of its ongoing multi-million-pound marketing campaign.

At the AM Awards roundtable earlier this year Gerry Moxham, the chief visionary officer at Click Dealer, suggested that the Cazoo's focus on marketing could benefit the entire sector by "educating the consumer" about the emergence of online car retail.

And while its headline sponsorship of Premier League Football teams Aston Villa and Everton will soon get underway, its latest national advertising campaign are now poised to celebrate the convenience of the online buying process.

The company will be advertising across all ITV, Channel 4 and Sky channels and the entire Global Radio network along with thousands of outdoor sites in some of the UK’s busiest environments as well as hundreds of Cazoo-branded taxis across London and other major UK cities.

Earlier this week Cazoo opened its first Customer Centre in Manchester (September 1), with founder Alex Chesterman telling AM that the move into physical premises did not constitute a "u-turn" in its digital model.

Chesterman revealed plans for "couple of dozen" Customer Centres across the UK, each of which will serve as a logistics hub and point of contact for customers wanting a vehicle handover or servicing.

In July, Cazoo completed the acquisition of car supermarket group, Imperial Cars, after it became the fastest UK business ever to achieve $1 billion (£800.8m) valuation - just six months after its launch.

Darren Bentley, chief customer officer at Cazoo, said: “We have already achieved significant national brand awareness in under a year since launch and feedback from consumers on our proposition is overwhelmingly positive.

“We plan to continue to invest heavily in marketing to build Cazoo into a household brand as we continue our mission to deliver an exceptional customer experience and the best selection, value, quality and convenience for used car buyers across the UK.”

At the AM Awards Roundtable meeting of car retailers from across the UK earlier this year, dealers questioned the long-term viability of platforms such as Cazoo.

But Gerry Moxham, the chief visionary officer at Click Dealer, said investors had backed such businesses in the anticipation of an explosion in online car retail which had yet to materialise.

Andy Oldham, chief executive of Dennis BuyaCar, said that new entrants such as Cazoo and heycar were actually helping to drive the market in that direction.

He said: “(Cazoo founder) Alex Chesterman is going all out on marketing and that can only help make consumers aware of the option of buying online.

“That will feed business into alternative platforms like ours and other car retailers that are ready to embrace that opportunity.”

“Cazoo is going to spend millions educating the consumer,” he said.

“Car retailers with the call centres and websites in place will be ready to sell to customers as they become aware they can transact in that way.”